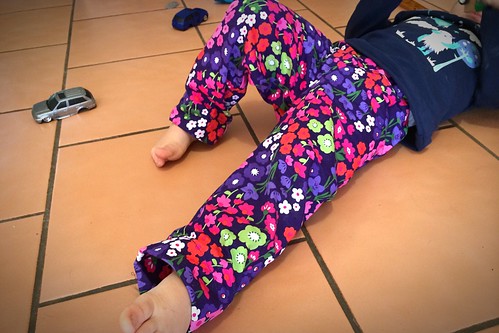 As my vague intentions of learning to use the Elna sewing machine I inherited from my grandmother never came to any sort of reality (as with most vague intentions, I suppose, but especially mine) I have been going to sewing lessons once a week. I have now got to the stage where I can (mostly) thread a machine, know how to use an overlocker – overlockers! what marvellous machines! – and I’ve sewn two completed things, a pair of pyjamas and a pair of pants with an elasticated waist, both for Edward.

The pyjamas were from a McCalls pattern for – I think it was actually for a baseball uniform, pants and a baseball shirt. It looks very sweet in a purple flannelette as pyjamas, with blue buttons on the top. “Blue buttons!” Edward declares when he wears them. He is currently in a “gleefully identifying things” stage. He read a book to me this morning, the story consisting of “cat! tail! ear! leaf!” as he jabbed his finger at those parts of the picture on the page he had chosen.

I chose a rather lurid purple floral fabric for the pants, a heavy and slightly corded material for winter. They look rather groovy now that they’re completed, and I really like the fit – a nice narrow leg but with enough room to wear comfortably with a nappy. (They’re from the Clean Slate Pants from Blank Slate Patterns – I skipped adding pockets, as Edward doesn’t use them yet. It was my first PDF pattern, and very easy and convenient to print out and put together. I think I’m a fan of PDF patterns).

My inherited sewing machine has a broken gear and I’m waiting for it to be repaired. In between lessons I cut out patterns and fabric, something I am incredibly slow at. My next project is something for me, a Tiramisu dress in a dark purple ponte knit. I have high hopes for it as dress I can wear to work this autumn and winter, but it does involve only my second attempt at sleeves and my first attempt at pockets, so I might reduce them to moderate hopes.

After the Tiramisu, I intend to sew the following, possibly not in this order:
1. A Beachy Boatneck for Edward in a cheery red spotted knit
2. Two Renfrew tops for me – a rusty red knit with short sleeves, and a dark grey knit with long sleeves
3. An Alma blouse for me in a floral print, although I think I may be being a bit ambitious leaping into that pattern.
4. The Little Bow Pleat Dress for my niece because it’s so gloriously cute, and I want to make something with an extravagantly huge bow on it just because.

And then endless possibilities and an increasing collection of bookmarked patterns stretch out temptingly before me – exercise pants! Cardigans! It would probably be sensible to wait until my machine is in working order and I have made a little sewing area at home before I go too crazy with future plans, but not-being-sensible is just too much fun.