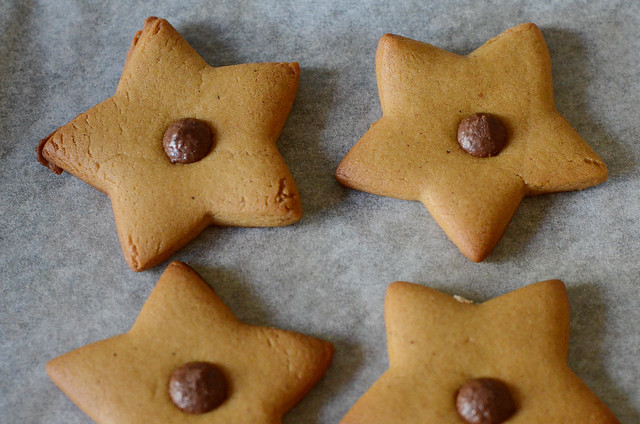 These are lovely spiced slightly crunchy gingerbread biscuits, adapted from a classic recipe in The Joy of Cooking. They’re great to make with children – the dough is easy to mix up, it involves melting butter in a saucepan (a big plus according to my four year old), they can press shapes out of the dough, and then decorate the resulting biscuits.

method:
In a small saucepan, melt together the butter, sugar and golden syrup or molasses until the sugar is just dissolved. Remove from the heat to cool until just warm.

In a bowl, stir together 2 1/4 cups of the flour, the baking soda, salt, and spices. Make a well in the centre, and pour in the melted butter mixture. Stir vigorously to blend together. Gradually add in the remaining 1/4 cup of flour. The mixture should now be a ball of smooth dough, pulling away from the sides of the bowl.

Remove the dough from the bowl and knead it a few times, before flattening it into a thick disc and wrapping it in plastic wrap. Put it in the fridge to cool down for 20 minutes or so, so that it’s easier to roll out. You can also leave the dough in the fridge at this stage for up to four days, returning it to room temperature before you roll it out. (You could presumably also freeze it and then defrost before use, but I haven’t tried that).

Preheat the oven to 180C, and roll out the dough to around half a centimetre thick. (Yes, I did actually get out a ruler and check this, although I never manage to roll out dough evenly anyway. Mine always end up being varying thicknesses, which doesn’t seem to matter all that much). Cut out your biscuits in whatever shape you desire (and if you’re cooking with a four year old, let them artistically place chocolate bits where appropriate). Depending on the shape you’ve chosen, this amount of dough should make between two to three trays of biscuits. They don’t spread much at all, so you can place them close together.

Bake the biscuits for about 8 minutes, until they’re just starting to brown on the edges. They’ll firm up as they cool down, and they’re easy to overcook (although that just makes them extra crunchy).

When cooled, they can be decorated with icing, but it’s not necessary. They taste great plain, and keep very well in a sealed container for at least a week. 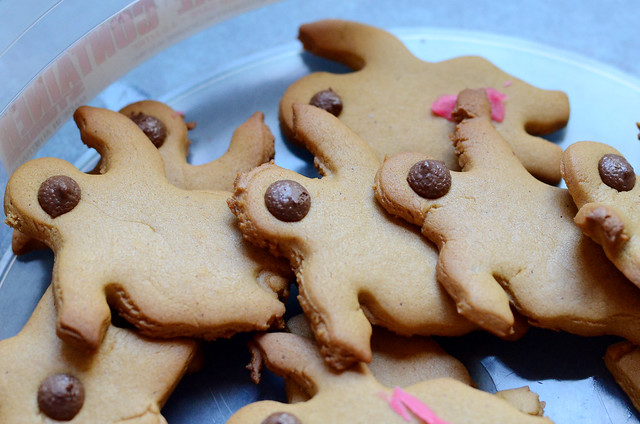