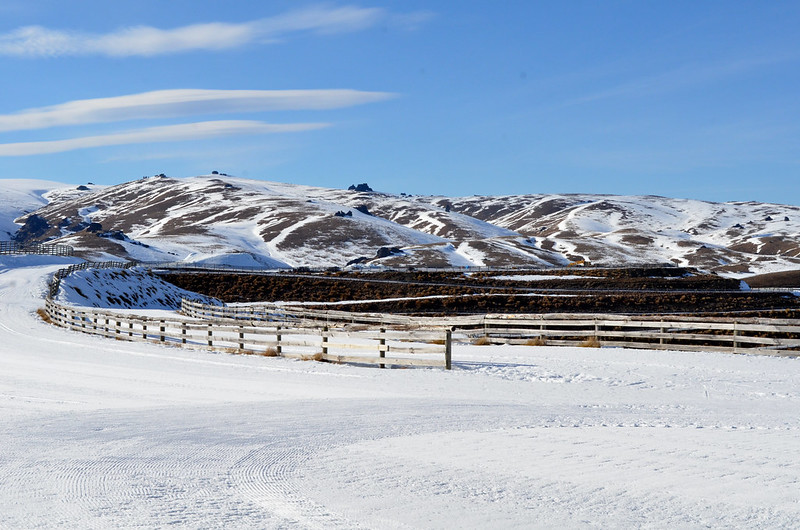 In preparation for our holiday in Wanaka, I ordered several sticker books from the Usborne sticker book range on such varied themes as dinosaurs, trucks and farm animals, and I recommend them heartily as plane entertainment aids for two year olds. “Where do you think this dinosaur should go, Ted?” Edward considered the matter with due seriousness. “Maaaaaaybe… in water!” he said every single time. Soon all the dinosaurs stickers allocated to that page were stacked on top of each other in a small pool of water. Watching this requires a certain amount of parental restraint in not rearranging the dinosaurs in a more aesthetically pleasing fashion, but the lengthy decision making process over each sticker makes it an enjoyably time-consuming exercise.

We stayed in a house next to Lake Hawea, and did various wintery holiday things. The area around Wanaka was a great place to holiday with children with plenty of interesting things to do within easy driving distance. Two year old Edward’s highlights were:
1. the dinosaur slide in the playground next to Lake Wanaka. It’s a slide shaped like a dinosaur. You slide down the dinosaur’s neck. From the perspective of a two year old, this is obviously the greatest thing of all time.
2. repeatedly sliding down on a tire with a parent down a snowy slope – “again! again!”.
3. making “snow balls” and a “snow man” ie. playing around with extremely icy snow which didn’t compact into balls at all.
4. staying “very very quuuuuuiet” in one of the dark kiwi houses at a bird park, and watching a kiwi scurry over a and take a drink from a little pool next to the glass.

Before this holiday, I had underestimated the vicarious enjoyment I get from watching Edward gleefully experience new things. I had wondered whether I would wistfully remember how holidays were pre-children, but instead I really loved watching his first tentative experience with snow and his wide-eyed gazing out of the back seat window as we drove through mountain ranges. (I also very much enjoyed my mother spending a day with Ted so that I could go skiing at Cardrona – vicariously enjoying your child’s wonder is always more fun when you’ve had a day off).

3 thoughts on “On the South Island”