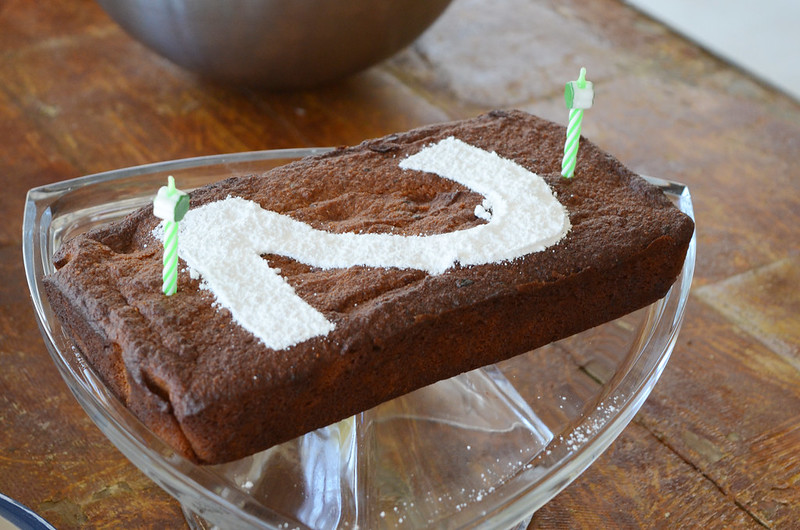 I made this date cake for Edward’s birthday, so that his little cousin who avoids wheat and sugar could partake as well (and I didn’t think the general heady excitement of having a birthday party really needed to be increased with a sugar high.) While a cake sweetened just with dates sounds a little austere, it actually had a lovely caramel flavour and beautiful soft texture.

1. I think at 18 months I was delighted at his first short sentences – at 2 years, we have weaving rambling conversations about whatever is on Edward’s mind. I am surprised by his recollections – he will often start telling me about something fabulous that that happened to him over a month ago (“Teddy go in train with Dada! People on train! Tunnel!”). He is anxious to identify everything, repeatedly interrogating me with “what dat?”. He can count to five, identify colours, knows the names of lots of things in his father’s toolkit and parts of the car. He is so very enamoured of vehicles of all varieties and gets irritated when I ignore his loud commands to follow concrete trucks when we’re driving somewhere together. “Truck! Concrete truck! Go dat way! MAMA GO DAT WAY.”

2. Not breastfeeding anymore. Edward finally weaned himself (with a bit of encouragement from me) at about 22 months or so, by which point I was very tired of breastfeeding and wanted my body to myself again.

3. Watching his imagination at work. This little cardboard box is a train, he will tell me, a tiny train, it has wheels, Teddy is driving the tiny train on a railroad, the tiny train is going up a mountain, a big mountain – and so on, as he waves a featureless cardboard box around and then chuffs it up my arm. He chats to himself as he plays, sometimes narrating what he’s doing, sometimes imagining things, and loves coming up with crazy “joke” scenarios (“Teddy is eatin’ a tractor!” followed by hearty laughter at his own joke, a trait he has obviously inherited from me.)

4. The great enthusiasm he takes in helping with chores – vacuuming, wiping up spills, tidying up his toys (well – occasionally). This evening I asked him to help me feed the cats, and he promptly barrelled out onto the front verandah, bellowing “hello cats!” before solemnly assisting pour water and food into the appropriate bowls. I’m sure chores won’t remain enthralling for all that long, so I’m making the most of this stage.

Things I’m not enjoying at 2 years:

1. I didn’t think I would have a two year old who doesn’t sleep through the night, and yet I do. So that’s a thing. He mostly only wakes up once and wants to drink a bottle of milk and be cuddled back to sleep. I can’t be bothered doing anything about this but I can’t say it particularly thrills me.

2. The advent of the sobbing toddler tantrum, generally about nothing in particular that I can discern, and usually accompanied by howls of “want! waaaaaaant!” which I can’t help but find a little amusing – the intense base demands of the toddler id.