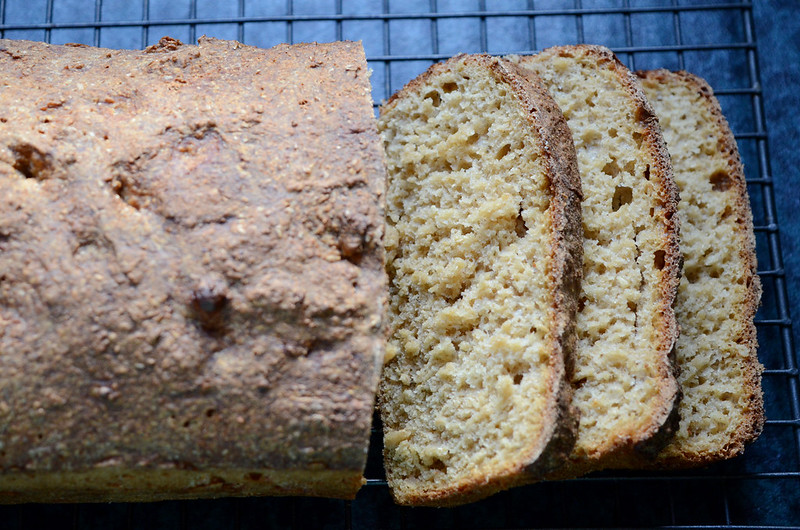 This is such a fantastic bread for such low effort. It doesn’t require kneading, it can rise overnight in the fridge so you can bake it fresh in the morning, and the combination of molasses with the wholemeal flour is so tasty. Next time I’m going to use a smaller loaf tin so I can get a higher rise – the original recipe recommends a 22cm x 12cm loaf tin.

Put half a cup of warm water in a bowl, and stir in the yeast and molasses. Leave for 10 minutes or so until it foams up a little. Add in another half cup of water, then stir in the flour and salt. Add around one further cup of warm water gradually until you’ve made a wet, sticky dough – I needed around 3/4 of a cup. Spoon the dough into an oiled bread/loaf tin. Cover the tin and then either:
a) put it in the fridge to rise overnight, which is what I did, or
b) set in a warm spot and allow to rise by one-third of its original size.

Heat up your oven to 230C, and bake the bread for 50 minutes, when it should be nicely browned and sound hollow when tapped. Tip the loaf out of the pan and onto a cooling rack to give a crustier finish. I think I waited about 15 minutes before cutting into the loaf for warm bread and butter, but I expect if you have a bit more discipline, you should probably wait until it cools properly.

While I was making this loaf of challah, glancing down occasionally at my son “playing” around my feet (in other words, unravelling a roll of alfoil and emptied a drawer of baking implements), I realised that I hadn’t been making bread recently because breadmaking is a little more difficult with a toddler, or proto-toddler, than it is with a largely inert baby. Needing to make sudden interventions or pick up a grizzling child is hard when your hands are covered in dough. This excuse sounds ridiculous when the kneading part of breadmaking only comprises a few minutes, but for some reason there is always some baby-related disaster during those few minutes. He has a knack for it.

This is Mark Bittman’s recipe for challah, the “traditional Sabbath bread of European Jews”. It is a lovely soft, eggy bread, but is best eaten on the day it’s made, as it gets a bit dry. Second-day-challah is perfect for bread pudding or French toast, both of which are met with enthusiastic proto-toddler approval.

Sprinkle the yeast into the warm milk, and leave it for five minutes, until it’s foamy and active.

Put the flour and salt into a large bowl. Crack the eggs and egg yolk into the middle, add the honey, then pour in the milk and yeast mixture. Mix everything together roughly with a fork, so that it’s mostly sticking together. Mark Bittman says if it’s dry, add in a little bit of milk until it’s wet enough to knead. He claims it is unlikely to be too wet. Mine was too wet, making me presume that I’d done something wrong along the way. Or perhaps Mr Bittman is simply too presumptuous about the state of my dough. (Oh, and obviously if it is too wet to knead, add a little bit of flour at a time until it’s kneadable.)

Check the whereabouts of your baby and hand them a distracting toy, because you’re about to get your hands covered in dough. Dump your rough mass of dough out onto your counter and knead away. It doesn’t need too much, just a few minutes until it’s smooth and elastic under your hands. Clean the bowl, and give it a light coating of oil. Pop the dough back into the bowl, cover the bowl with plastic wrap, and leave it for 1 1/2 to 2 hours, until it’s roughly doubled in size.

Punch down the dough, and divide it into three similarly sized balls – weighing them if you want a nice evenly braided loaf. Leave the balls of dough to rest for about 15 minutes, then roll them out into ropes – about 36cm long, but there’s no need to be exact about it. You want your loaf to fit onto your baking tray (you should probably find a baking tray and lightly oil it, by the way). You can create all sorts of complicated braided loafs, or you can just plait your three strands like hair, and tuck the ends under. Let the dough rest for 30 minutes while you heat your oven up to 190C. Just before putting the bread in the oven, whisk up an egg and brush it over the loaf. (Generally, recipes call for an egg yolk, or an egg yolk plus a little water, but I’ve never seen the point of seperating an egg. This article on glazing kind of backs me up. Well, not really, but it concludes that many forms of glazing are acceptable.) If you like, sprinkle the glazed loaf with poppy seeds or coarse salt.

Cook the bread for 40 to 50 minutes, or until it’s nicely golden and sounds hollow when you tap the bottom of the loaf. I’m always a bit paranoid about undercooking bread, and I think I left this in a teenst bit too long, judging by the crust.

Another recipe from Doris Brett’s Australian Bread Book – a delicious cheese-filled bread which is wonderfully flavoursome. It would be gorgeous with soup or pasta, in thick warm slices, scented with sharp cheese.

Dissolve the yeast in the lukewarm water with 1/4 teaspoon sugar. Stand for 5 minutes until the yeast is frothy.

Meanwhile, in a large bowl mix together the melted butter, milk, remaining sugar and salt. Cool until lukewarm and then add the frothy yeast mixture.

Add the final 3/4 cup flour slowly, until the mixture has formed a dough. Remove the dough from the bowl and knead for 15 minutes, until the dough is smooth (although the cheese will still be lumpy) and elastic.

Brush a large bowl with oil, place the dough in it, and loosely cover it. Leave until it doubles in size.

Punch the dough down and knead briefly. Either shape it into rolls in a greased muffin tin or a baking tray, or place dough in a bread loaf tin. Bake in a preheated oven at 190C, for 15 minutes for the rolls, or 30 minutes for the loaf. To test whether it’s done, tap the bottom of the loaf – it should sound crisp and hollow.

This very easy bread recipe is from Doris Brett’s fabulous Australian Bread Book. She describes it as a “no-frills bread… simple, but remarkably tasty, with a lot of body.” It’s a very fast and high riser, which is excellent if you’re in a bit of a hurry. It also makes lovely bread rolls as well as being an fantastic loaf bread.

Dissolve the yeast in 1/4 cup of the lukewarm water with 1/4 teaspoon of sugar. Allow it to stand for 5 minutes until frothy.

Slowly add the last cup of flour and any extra needed until the mixture is stiff enough to form a dough. Remove the dough from the bowl and knead for 15 minutes, until the dough is smooth and elastic. (Note – I never knead dough for 15 minutes – my limit is usually about 5 minutes. I’m not sure how much difference this makes to the finished loaf. My dough always feels smooth and elastic, and the bread is lovely. One day I’ll have to experiment with kneading for longer to see if it makes any difference.)

Brush or spray a large bowl lightly with oil, place the dough inside, and cover lightly with plastic or a tea-towell. Allow the dough to stand and double in volume.

When the dough has risen, punch it down and knead briefly. Either shape it into 12 rolls, and place them into greased muffins tins, or onto a tray, or place the dough inside a bread tin. (Niki at Esurientes has some great tips and thoughts on breadmaking here.) Cover the dough, and let it double in volume.

When the dough has risen, bake in a preheated oven at 190C. The rolls with need about 15 minutes, the bread tin about 30 minutes. To tell if bread is baked, roll it out of the tin, and tap the bottom of the loaf or roll – it should sound crisp and hollow.