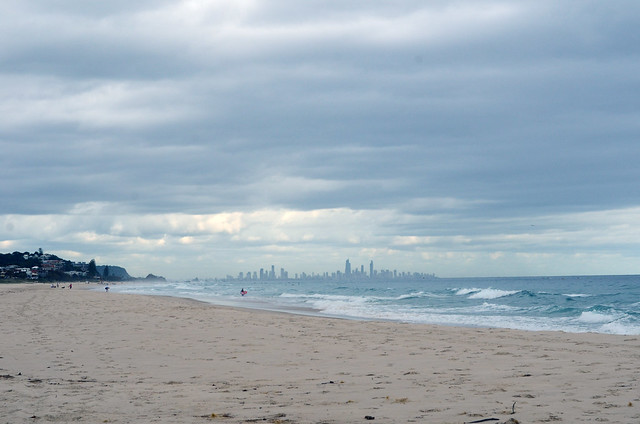 We sat on the hill overlooking the stage, near the mixing desk. Intermittent lightning of a storm to the south flashed on the horizon, highlighting the scattered clouds above us. People around us talked about whether it would rain, and what songs they hoped to hear, and in tones of mild dawning horror, how many under-aged kids there were sitting around them.

When Hozier started playing we all stood. The hippy chick next to us started dancing and singing ecstatically in a vague circle around her partner. He was Viking-like with long blonde hair and a beard, and stood stock-still while his partner danced, the immobile rock around which she orbited. Slightly in front of them stood a couple who spent most of the concert rhythmically stroking each other’s arses. “They’re engaged,” said my companion in a tone of mild disdain. “Who the hell is that into each other once they’re engaged.”

Hozier was an excellent live performer supported by a great band; many of his songs are recorded with beautiful background harmonies, and they were reproduced so well in concert. The rain held off while we sang and clapped and then streamed out, walking back into the city. It began to fall as I drove home on the highway, the big spattering drops and the rhythm of the wipers punctuating the memories of music playing around in my head.

Tori Amos sung this version of We Three Kings on her Christmas album, Midwinter Graces. It’s a little Tori-ish, and heavy handed with the production, and I like it.

Diana Panton has a stunningly beautiful voice, and this is an original song of hers from her Christmas Kiss album.

Winter’s fine, a little bit of cold and ice
And we’re stuck inside, with the drapes shut tight

Said The Whale are an indie rock band from Vancouver, and Summertime in Australia is a short little track from their West Coast Christmas EP collection. It’s upbeat and sweet, and sometimes I like having songs on the Christmas mix that acknowledge that Australian Christmases are summery affairs.

Gone away, is the bluebird
Here to stay, is a new bird
He sings a love song,
While we go along
Walking in a winter wonderland

I heard the bells on Christmas Day,
Their old, familiar carols play

Sarah McLachlan’s version of this carol is beautiful, one of my favourite versions. Wikipedia says I Heard The Bells On Christmas Day is a carol based on an 1863 poem “Christmas Bells”. I used it in the 2013 Christmas mix.

I really like Anais Mitchell’s slightly reedy voice, and Song of the Magi is from her Brightness album. I included it on last year’s mix.

By the time we got to Oslo, snow was gone, and we got lost
The beds were small but we felt so young

Most of Low’s Christmas album (I wonder how many Christmas albums are just entitled ‘Christmas’) is a little too slowcore for my taste, but Just Like Christmas is on the more upbeat side. I included it on last year’s mix.

Wonder whose arms will hold you good and tight;
When it’s exactly twelve o’clock that night

Rufus Wainwright has such a wonderful voice, and this version of the 1947 pop song was from The McGarrigle Christmas Hour album. I included it on last year’s mix.