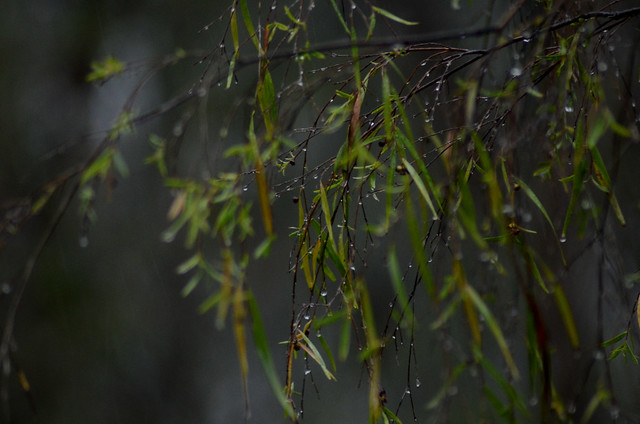 Our back verandah stretches the length of the house, and if you stand at the top of the stairs you can look down into the garden towards the rear dam. When the water is low, you can sit on the back stairs and watch wading birds picking their way along in the shallow water. After some rain, when the dam level is higher, we see ducks flying in; usually Pacific black ducks and Australian wood ducks. I’ve taken a surprising number of photos of birds and wildlife from the verandah; recently a koala spent the day in one of the grey gums at the side of the house, and I could prop my elbows on the railing and take a few photos of it wedged into a forked branch.

On the weekend we had a full day of steady rain, and I bundled Edward into a rain outfit of ski jacket and surf shorts so that he could muck around in the puddles. Rivulets of water started running down the driveway as they unfortunately do every time it rains heavily, taking stones and gravel with them and depositing them into the drain that runs alongside the driveway and then under it, taking the water into the dam. Or at least it’s supposed to; bits of driveway previously washed into the drain have hampered its operation somewhat.

I stayed up on the somewhat dry verandah, as I had the baby strapped to me as she snoozed in her carrier, taking some photos with my zoom lens and watching the bright blue of Edward’s jacket as he puttered back and forth getting his legs thoroughly covered in mud.

My only zoom lens is a cheap Nikkor 70-200mm that I’ve had for around a decade, since I bought my first Nikon body. (Typing that was the first time I realised I’ve had that lens for a decade and now I feel terrifically old). I would like a better and longer zoom, but it would be an expensive purchase so I perpetually put it off, only remembering this with mild frustration when I’m trying and failing to take a photo of a bird in flight. However, taking a moment to try and find a shot that will work within the limitations of the lens is usually worthwhile; its restrictions create opportunities that I might have overlooked otherwise.