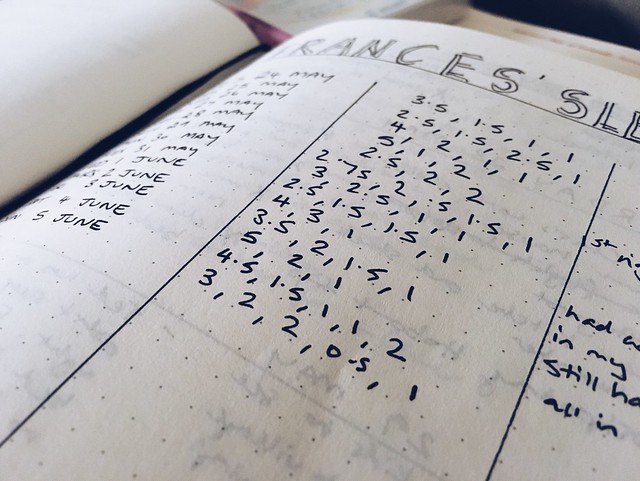 I make notes about the baby’s sleep patterns. When she’s had a string of bad nights I like being able to look back a week and reassure myself that she is capable of sleeping for five hours at a stretch when certain mysterious circumstances align. What those circumstances might be are between Frances and her conscience; she’s certainly not letting me in on her secrets.

I am much more relaxed about co-sleeping this time around. At the moment I’m doing a weird combination of baby-carrier (during the day), putting her to sleep in her cot, and giving up during the early hours of the morning and sleeping with her on a mattress on the floor (as then I don’t have to worry about her rolling off a bed). Motherhood is so very glamorous.

Sleep deprivation steals my patience. Other things as well, but lack of patience is what I notice most; when I’m trying and failing to respond positively to being asked the same question for the fifth time in a row, or repeating my son’s name again and again as he fails to respond. There are quite a few pre-schooler behavioural traits that make me want to scream, but selective deafness is one of the most frustrating. I suppose from his perspective he is busily considering very important matters like volcanos and space shuttles, and in contrast I am wittering on about something incredibly dull like eating.

With a couple of months of broken sleep under my belt, patience is slowly coming back to me and I find myself able to parent with some grace again, to find enjoyment in Edward’s endless questions. “I have spotted an ibis having a drink!” he said to me importantly a few days ago, pointing towards an ibis picking its way along the dam edge. The intensity of his fascination with the world awakens my own joy, and the muddy little dam is transformed; the ibis is beautiful, gleaming in the last light of the day as it gracefully steps through the shallow water; the chirping high calls of the frogs in the reeds are like music, their notes following us as we eventually dust ourselves off and walk hand-in-hand back towards the house.