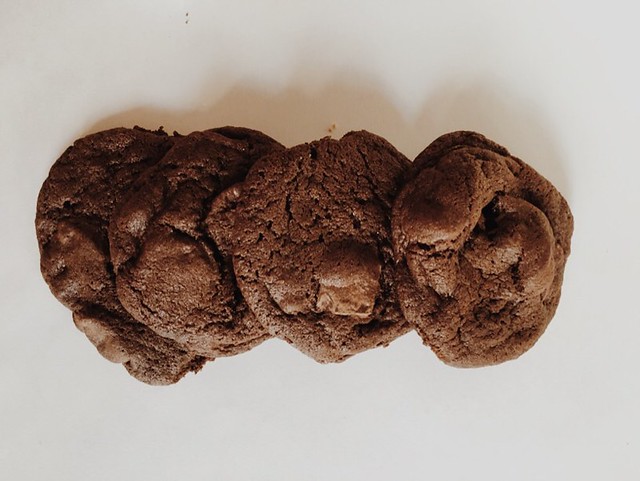 This is a recipe from Dan Lepard’s Short and Sweet which is actually entitled “Dark Chocolate Chunk Cookies”. I know this is much more alliterative than my version, but saying “cookies” makes me feel un-Australian. Biscuits it is. They’re extremely chocolatey and rich and magnificent. Lepard suggests using them for ice-cream sandwiches, but honestly despite my extremely sweet tooth I think that would be overkill. They’re pretty great as an accompaniment to coffee, though.

The original recipe calls for 300 grams of dark chocolate. I reduced this to 200 grams because that was what I had in the cupboard, and I think if I used 300 grams there would have been more chocolate than dough. That’s not necessarily a bad thing, of course; sometimes one is in the mood for a biscuit that consists mostly of chocolate. They turned out perfectly well with the reduced amount, so you could probably add chocolate chunks to taste without anything too terrible happening.

I presume the 25g of caster sugar is doing something vital texture-wise, otherwise I’d be tempted to leave that out as well just so you don’t have to haul two types of sugar out of the cupboard.

Beat the butter, sugars and vanilla essence together until smooth and creamy. Beat in the egg until well combined.

Either sift together the flour, cocoa, and bicarb in a seperate bowl and stir them into the butter mixture (per the original recipe); or measure them out on top of the butter mixture, refrain from sifting, then stir it all together. I promise the lazy method works perfectly fine. It mixes together into a fairly stiff dough, and is consequently too difficult to stir with one hand while holding a baby. You will have to put the baby down and manically sing to her while stirring the mixture frantically. The things we do for biscuits.

Stir in your desired amount of chocolate chunks with a firm and unyielding hand. Disabuse your three year old of his fine notion that we are putting one piece of chocolate in our mouths for every piece that goes in the bowl. While grinning entertainingly at your grumpy infant, scoop up tablespoonfuls of the dough, roll into balls, and place on lined baking trays about 4-5cm apart. This makes around 18 or so biscuits. Bake for around 12-14 minutes – the biscuits should be just firming at the edges and be a little puffed up. Let cool for a few minutes then transfer to a rack. Enjoy with coffee or tea, or possibly sandwiched together with ice-cream if you’re feeling particularly sugar deprived.