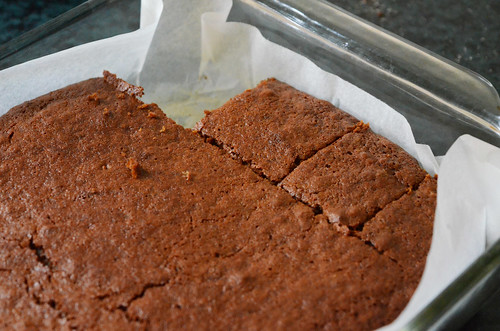 I was moved to another area at work occupied by rather more people than the previous area I was in (I do refer to it as Cubicle Death Farm, but only in my head and mostly in an affectionate tone), which has given me a chance to try some new cake recipes and leave cakes in the kitchen for general consumption. Occasionally with apologetic post-it notes about burned bits, raw bits, and lumps. Sifting is so dull.

1. Gingerbread snacking cake from Smitten Kitchen (pictured above) is delightful – a really easy recipe that you can put together in one saucepan and bakes in half an hour. Lovely combination of spices, and you can easily halve the sugar. I used treacle instead of molasses, and it still has a nice depth.

2. Chocolate banana bread from Smitten Kitchen – this isn’t overly sweet, just nice and darkly chocolatey. I like banana bread, but I think it is only improved with the addition of chocolate. As are so many things!

3. Ginger & parsnip cake from Dan Lepard’s Short and Sweet – rather like a carrot cake, in that it uses grated raw parsnip, and a wonderfully spicy gingeriness. I’d like to try the alternate versions with turnips and swedes.