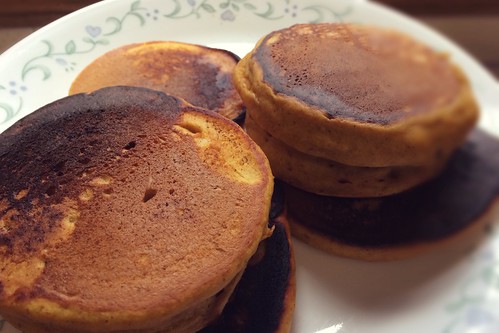 I found this recipe somewhere in the depths of the internet, and now can’t remember where. Google is no help because there are billions of almost identical pumpkin pancake recipes floating around out there. Anyway, these are lovely, and as you dig into them for breakfast you can think virtuously, “I’m eating vegetables!” and it will be somewhat true.

The night before you decide you want pancakes – if you’re that organised, which honestly I rarely am – chop up about a quarter of a smallish pumpkin (I know that’s unhelpful, but I just eyeball what amount of pumpkin will roughly make a cup, and incorporate leftovers into dinner) and steam or boil it until it’s nicely mushy. Chuck it in the fridge, and go to bed dreaming of pancakes.

In the morning, sift the flour, bicarb and baking powder (or don’t, I think it’s fine not to sift) into a large bowl, add the sugar and spices and stir. Whisk the milk, egg, oil and vanilla extract in a different bowl, and then stir in the pureed pumpkin.

Pour the pumpkin mixture into the flour mixture, and fold in until well combined.

Heat up your frying pan, add some butter, then scoop in 1/4 cups of the batter, cooking pancakes for a few minutes on each side. Stack up and serve to your delighted family, or just to yourself. They’re a pretty pumpkin colour, and the spices go beautifully with syrup or honey as a topping.