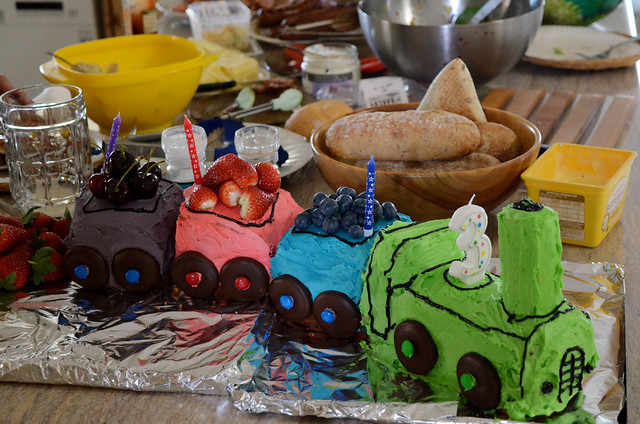 Someone foolishly showed Edward the classic Women’s Weekly birthday cake book and he flicked through every single page, eyes gleaming avidly. “I would like… that one! And that one!” he said eagerly, until I informed him that birthdays were a one-cake-only kind of deal. Naturally he eventually settled on the cake that graces the cover of the book, the train with carriages filled with cargo. I had engineering assistance from the husband, and Edward was reasonably delighted with the result (although I think he mostly ate the icing).

1. It’s genuinely fascinating having those kind of conversations with your child where you see them connecting two concepts and coming up with original thoughts. It’s not so delightful when that original thought is “womans don’t know about taps”, due to my failure to answer a plumbing related question with sufficient specificity, but I was interested to see his first extrapolation from “things Mummy does” to “things all women therefore do”.

2. Invented semi-monotone songs that are half nonsense, half random phrases like “the open road”. They always end on a long drawn-out note, possibly accompanied by twirling, and then a glance at the audience for a suitably enthusiastic response.

3. We bought Edward a little junior drum kit for his birthday because drums has always been the instrument he’s been most enthusiastic about, and we’re keen on giving him decent instruments to play on when he’s young. I did regret this decision a little bit when I heard how loud they were, and I had to buy him a set of children’s drumming headphones to limit the noise levels he’s exposed to, but watching him hammer away at them and do a full run across the kit ending with a triumphant cymbal crash is so much fun.

4. No more nappies. Well, mostly. He’s still in nappies at night, but they’re frequently dry in the morning.

5. Edward is rather reticent in returning my declarations that I love him, which makes the infrequent occasions that he very seriously tells me that he loves me even more endearing.

Things I’m not enjoying at 3 years:

1. The Why Stage. Oh god, the Why Stage. I know I’m probably supposed to delight in it, and I do enjoy the insight it gives me into the way Edward processes information and the things that interest him (which at the moment is very much focussed on How Things Work). But he is RELENTLESS. The stream of constant chatter, the repeated questions if I don’t respond; it’s exhausting. I resort to “I don’t know” and “just because” far too often, just to make it stop.